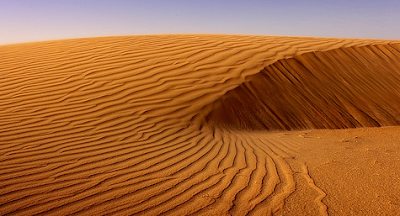 Western Desert, Kuwait
The hermit crab is a politician. When sensing danger from above, it looks straight ahead and runs away sideways. It's interesting being alone, especially here in the desert. The word 'hermit, in fact comes from 'eremia', Greek for 'desert'. One has a chance to examine one's soul to a greater extent than one might otherwise be inclined to do. By 'soul', I mean endlessly processed images,motives, aspirations, perhaps what Jung might have called 'waking dreams'; big, empty skies and featureless landscapes with wind-blown ripples which can focus the mind. Trivia are absent - there's nothing to be distracted by except oneself. Some find this unsettling. I don't - perhaps there's a trapped Buddhist somewhere. I wonder if such people generally see themselves as opinionated, gauche and lumpen in public. I rather felt that I was becoming so, even after only two days of solitude and it is perhaps the perceived certainties arrived at in one's personal spaces that are the least reliable, requiring the gentle intervention of friends who have the temerity to disagree.
I'm finding myself revisiting what Jonathan Edwards called 'experimental religion' a hybrid of science, faith and reason that causes speculation about the mind of God - should he or she be sufficiently consonant with what serves the human race as intellect to be said to possess a 'mind', having no magnitude, or proportion, merely direction or will. It is a matter for dangerous philosophy to speculate how the affairs of mankind have been shaped by the intervention of the Divine and more significantly the timescales and personnel involved. We are adopters, adapters and improvers with prehensile thumbs, who first have to be convinced of the genetic advantage of a philosophy or procedure before we commit energy and time to it. Which is ironic, in the postmodern Internet-rich milieu of communication, which is mostly random noise. The real movers and shakers are subsurface, like ocean currents, their Machiavellian purposes hidden from the masses, their doings only known to a few. I wonder whether at the heart of us all there is a rebellion which flows from the inescapability of being 'just another brick in the wall' and wishing that we were intellectually tall enough to see over the squabblings of the masses to the architecture and grandeur which moves the ship forward, and in which direction. "When two or three..." Hitler, Goebbels and Himmler, perhaps. Power is not, it would seem, in the hands of those whose names are daily before us, but in the engine rooms and steerage units, with quiet, effortless transfers of vast sums, in discreet assignations, levering us where we may not wish to go.
Left here by Unknown on Saturday, February 27, 2010 1 comment:

Being Nice to Canadians

In case any of you have been nodding off in front of Turkish soaps, or not noticing Google's newest banner, you might recall that quite an important sporting event is starting shortly. Round here, there's not a lot of interest in the ladies luge or speed skating, but on the other side of the globe it's rather different. Vancouver is a lovely city, I am told, despite the fact that the bars apparently close early. At 11. In the morning. It rains quite a lot and can be quite chilly during the winter months, which has equipped it well for the quadrennial shenanigans in the snow which start tomorrow. Helicopters are augmenting the meagre precipitation to give the snowboarders some white stuff to slide down. Torchbearers included Sebastian (Lord) Coe and the Terminator, inter alia, braving inevitable protesters and sub-zeroes. AS was heard to remark with typical Austro-Californian directness that it was 'colder than a Newfie's arse up here'. I wonder what he meant..

There's drama aplenty so far - a one-man ski team from Ghana, via Milton Keynes - a drama indeed if he can manage not to come last - and an Irish bobsleigh team which has qualified despite Australian protests. It's probably unwise to talk about hockey, since the Canadians have only taken gold once since 1952.

I do like Canadians, they're Auntie Bessie in a mukluk, preposterously nice Americans with manners and a rare economy with words which I find soothing and will host a wonderful Games, despite having moaned endlessly for seven years about how much it has cost them. Go, Canada. Or, is it 'Oh'. I hope we hear it often.
Left here by Unknown on Friday, February 12, 2010 5 comments:

The Battle of Wakefield and Other Cautionary Remarks

I did something rather strange the other day. I picked up a book of poetry. In my defence, it was at a leaving party and I only had the Vicar for company. I hardly dare to admit this to the squadrons of eager followers here, since, of course, I am a warthog with no imagination and a fragmented soul, but I do rather enjoy the odd iambic pentameter or five...Of course I do.
Physics students remember fondly the exploits of Richard, Duke of York, who at Wakefield 'gave battle in vain' when remembering the order of the spectral colours. When we were six, we learned that 'he had ten thousand men. He marched them up to the top of the hill and he marched them down again. And when they were up, they were up, and when they were down, they were down, and when they were only halfway up, they were neither up nor down.' As an archetypal bystander, the halfway house really is home. It lacks the panorama of the fortress and the freedom of the meadow; nevertheless the vantage point is usually OK and climbing higher makes one conspicuous, don't you find?
I wonder if I am therefore a closet Laodicean? or, perhaps not -  being lukewarm about certain things can't always be classified as sinful, many things deserve mediocrity in one's response to them and emotional responses are so frightfully exothermic. The planet is warm enough without my adding a kilojoule or two to the total.
A A Milne says it all so well for me.

Halfway up the stairs
Isn't up
And isn't down.
It isn't in the nursery,
It isn't in town.
And all sorts of funny thoughts
Run round my head.
It isn't really
Anywhere.
It's somewhere else
Instead.


I have removed the exclamation marks and I have no idea who the child is.
Left here by Unknown on Monday, February 08, 2010 2 comments: 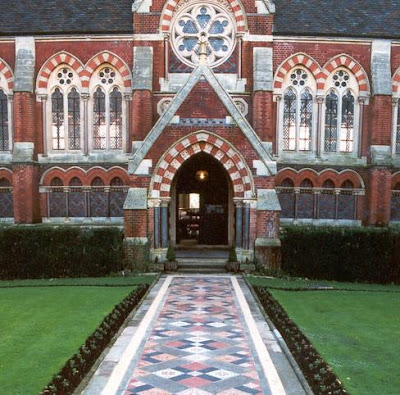 Were I a benevolent, wealthy, middle-aged philanthropist – I am in fact, none of the above, and were I well-versed in the social anthropology of my culture, I might think it a fine idea to found a school.
Grocers do well at this – one of my old schools was founded by such a man four hundred and fifty years ago and still bears his name while the public (read ‘fee-paying’) school in the same town, also founded by him, enjoys the reputation now of being one of the finest co-educational private schools in the UK. I went there too, as a penniless foundationer scholar.

The image will be familiar to 'those who know'.


I sometimes reflect in my later years whether it all did me much good. There were fags – I was one, and I had a ‘fagmaster ‘, which  in the colder light of 2010 sounds positively eerie. There were ‘floggings’ or ‘beatings’ for antisocial offences and my housemaster won the DFC during the Second World War. Cricket and Latin were compulsory.  In the light of all this, the recent debate at Westminster Central Hall on whether such places are a ‘blight on British society’ caught my attention.
There’s still a groundswell, concealed, but flowing, that people send their kids away to  school to ‘mix with the right sort of people, like us’ as well as to get an education. In spite of Blairite rhetoric about education cubed – I bet he regretted that – merit still remains an also-ran to money, influence and power.
Yet, there will be no change, much as we might like to imagine that there ought to be. It’s unthinkable to turn the educational system over to a new breed of sociopolitical engineers who will make an even bigger dog’s breakfast of it than the last lot did. Ultimately, we are selfish little animals, hard-wired to tread on those who get in our way, whether on a cricket pitch or in an interview room. Recent research has revealed that related sperm are biochemically advantaged in polygamous mice. Weaselly collaboration, or sperm like us, in other words…
Left here by Unknown on Sunday, February 07, 2010 No comments: