The Irony of Beards 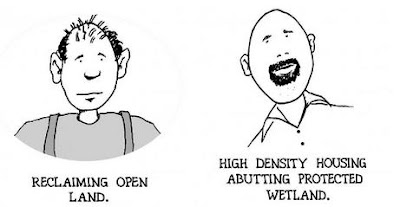 King David pretended to be mad to escape the clutches of King Saul, taking refuge with the King of Gath and we are told that saliva dripped down his beard. Which is ironic really, since David, as a beardless youth, 'made his bones' by well-aimed missiles at another gargantuan Gathite, probably spectacularly bearded. Perhaps he used the beard as a line of sight. Unlike Cain, who was 'an hairy man', his brother Abel was a 'smooth man' whom as a child I always imagined to be superior - the languid, aristocratic type casting the odd glance at the sheep - over the agricultural, barbate peasant, grunting with effort to wring crops from the earth. Which brings me nicely to today's offering. It's ironic that I find myself with something discreetly silver and  well-trimmed, almost accidental stubble. 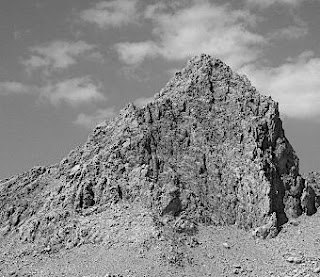 Clever folk should rule the world.

That, anyway, is what certain people who consider themselves far smarter than you or me tend to think. These clever people hang out with other clever people, all of whom are very impressed with the intelligence they find around themselves. Yes, for the good of everyone, they must rule. Of course they must. All things being equal.

Without such leadership, after all, how would the little people - those of us less brilliant, less progressive, less aware,  know precisely how much revenue, how much of “our common wealth,” should be obtained by state government through taxes and then spent on various modern initiatives like education, wars and healthcare.

The more I listen to the aloof, imperial, almost magisterial would-I-lie-to-you pronouncements from the current tenant at the cottage on the hill, the less confidence I have. Dear old Uncle Jimmy, who wasn’t the best President but one of the shrewdest, commented that "I think an overwhelming portion of the intensely demonstrated animosity toward President Barack Obama is based on the fact that he is a black man, that he's African American."

Jimmy, (84) has a point, Southern tea parties notwithstanding. It isn't just "socialised medicine" and bank bailouts that enrage the Obamaphobes. They're pushed off balance by the social cataclysm symbolised by an African American president whose middle name is Hussein. So, why are we surprised? Throughout US history, populist movements have harboured both a resentment of economic fat cat elites and a suspicion of blacks, Jews and immigrants. Conservatives who deny that reality are just as obtuse as liberals who dismiss all of Obama's detractors as racists.

I’ve just returned from Oman, where there’s much more of an egalitarian spirit about the place. Kuwaitis are perceived as stuck-up and unfriendly, so it was a change to visit somewhere where it was OK to shake hands with an Indian and  actually share a table with him. Especially if his name was Hussein.
The image is of the Omani desert. In black and white.

Evolution Isn't a Theory. No! Really?

Richard Dawkins’ new book is out, presumably in celebration of which he gave an interview with David Frost on ‘Frost Over the World’  today(Jazeera TV, 12/9/2009). The Frosticle, whose intellect is less well honed than it once was, asked a few banal and unimaginative questions to which the guru of humanism made polite, but uninspiring replies, interspersed with his characteristically self-deprecating grin which he uses in the presence of morons. There are a few little nuggets of flammable material in ‘The Greatest Show On Earth’, however. This from the first chapter.
‘’Imagine you are a teacher of more recent history, and your lessons on 20th-century Europe are boycotted, heckled or otherwise disrupted by well-organised, well-financed and politically muscular groups of Holocaust-deniers [who] really exist. They are vocal, superficially plausible and adept at seeming learned. They are supported by the president of at least one currently powerful state, and they include at least one bishop of the Roman Catholic Church. Imagine that, as a teacher of European history, you are continually faced with belligerent demands to “teach the controversy”, and to give “equal time” to the “alternative theory” that the Holocaust never happened but was invented by a bunch of Zionist fabricators.’’
While most scientists (90% of the Royal Society) are not religious and thus have no ethical problem with evolution as best-match hypotheses for the way things are, Dawkins’ sinister comparisons between Holocaust-deniers and Evolution-deniers is sickeningly pernicious, underhandedly anti-intellectual and will bite back in the future. Hopefully quite hard.
The image carries no significance. It's just weird, a paradigm of my own thoughts. Live with it
Left here by Unknown on Saturday, September 12, 2009 2 comments:

I read this from a Vedic site the other day, on the Sathyavathi mode of worship. 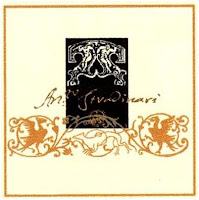 'Once upon a time in Cremona, there lived a person by name Antonio. He used to earn his livelihood by making violins, but being a perfectionist as he was, he used to take one full year to make a violin. His friends chided him, saying, "O mad man, how do you expect to eke out your livelihood if you spend a whole year to make one violin? Antonio replied, "God is the embodiment of perfection. Whatever He does is absolutely perfect. He will be pleased only when we discharge our duty in the most perfect manner. All my work will be an utter waste, if God is not satisfied!'
I sometimes feel that I am a victim of my own perfectionism – the desire to do whatever I do well. Playing in church the other day, I was struck- not so much by the satisfying resonance of my guitar, which after a little work and new Elixir strings sounded quite beautiful in the confined alcove where I was playing - but by the mistakes I was making through lack of skill and practice. The perfectionist hears the voice of God, and in his effort to reach upward, like the archer, misses the mark, and as such, he is inevitably flawed. And yet, in spite of this, something of glory, the sea of glass, the fragrance of the air of Zion found its way to me.
Left here by Unknown on Friday, September 11, 2009 1 comment: 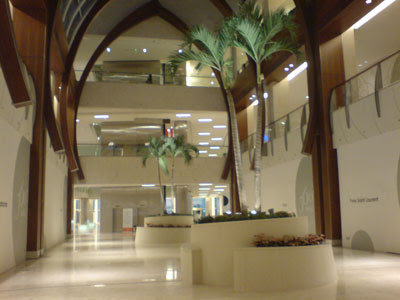 Paid a visit yesterday to the newest temple to Mammon, the '360 Mall'. It's a cathedral, consecrated to the overfed saint of expensive, not necessarily good, taste, available to all, as long as the pilgrims have enough money to pay the tribute. Or, it will be when it's finished. After gawping at the architecture for a while, I found myself asking whether lifestyle consumerism counterfeits Christian spirituality. If I am allowed, to use a 'Christian' syntax, it 'evangelises and makes disciples'. It offers flawed worship, false hope and incomplete assurance since advertising strategies link products with our personal desires and values. So when people feel something is missing, rather than look to God, they go shopping, which can be seductive, cyclic, addictive and ultimately impoverishing. Further, consumerist thinking causes us to have a smorgasbord mentality about the churches we attend and a pick and mix attitude to the doctrines we find there.
I think that a deocentric spirituality has inherent dissatisfaction, the inner voice whispering "There must be more". Consumerism mimics the restlessness of our pilgrimage, keeping us permanently dissatisfied.  Furthermore, there's no place for the poor. It used to be said that the fruits of a society were seen in how it treated its poor. Postmodern society structures itself around consumers, so the poor can't compete, they have no function; they are useless in a consumer world.
Perhaps the only way that consumerism can be effectively countered is by developing an alternative world view together with an alternative lifestyle, which might actually shape our character. We are taught as believers that we have the resources to engage with a consumerist mindset and outclass it. The crucial issue, perhaps, is discipleship, which requires teachability, corporate identity and sacramental grace.
I don't think I've quite arrived as Paul did when writing to the Philippians "I have learned, in whatever state I am, to be content", but I know myself to travel more lightly than I once did. It might be instructive if my comparatively few worldly possessions were taken from me, or worse, I had to make do with products of inferior quality, bought from the 100 fils shop rather than from Dolce & Gabbana. H'm.
Left here by Unknown on Friday, September 04, 2009 2 comments:

Unlike Tarantino's  'Inglourious Basterds', which is narcissistic, plagiarised, suety, historically and morally questionable, the Japanese director Koji Shirashi's film 'Grotesque' has been denied a certificate by the British Board of Film Censors. The board said the film was concerned with the assault, humiliation and torture of two victims; themes included imprisonment, restraint, and sexual assault and the main characters receive  horrific injuries until they die. It features minimal narrative or character development and presents the audience with little more than an unrelenting and escalating scenario of humiliation, brutality and sadism. The chief pleasure on offer seems to be in the spectacle of sadism for its own sake and for this alone, the BBFC is to be applauded.

Our curious predisposition to explore the caverns of our minds where the monsters dwell isn't, of course, new. '120 Days of Sodom' is an unrelenting and ultimately sickening parade of degradation, child molestation and torture, written by a depraved sociopath with a grudge against the Church. In former times he would have been labelled as 'possessed'. I wonder if the same can be said of two pre-teen brothers who recently inflicted seemingly motiveless and savage violence on two even younger boys in Yorkshire. Authorities had had 'extensive contact' with the boys over several years.
It might be instructive for a clinical psychologist with plenty of time and a strong stomach to investigate these boys' exposure to material that most humane members of society would throw up at.
The linkage seems so obvious. Exposure to the dark side has consequences for impressionable, perhaps weak personalities who have not enjoyed the benefits of competent, firm leadership during their earliest formative years. I fear that it is too late for them now.
Left here by Unknown on Friday, September 04, 2009 No comments: