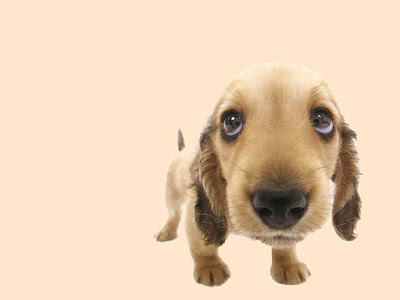 There's something of a frontier town feel about Linux. It asks you to do things in ways you had almost forgotten. Apart from being blindingly fast - the whole deal fits snugly into RAM like the bound foot of a 19th century Chinese courtesan, leaving vast acreages left over - what does Vista do with it all; it must have hectares of redundant code, like DNA.
I rather feel like the puppy in the photograph - thanks to Barry K for a system even I can use - not very knowledgeable but mighty curious.
I haven't figured out how to crop this image yet, but at least I managed to find it..
Left here by Unknown on Thursday, December 18, 2008 1 comment: 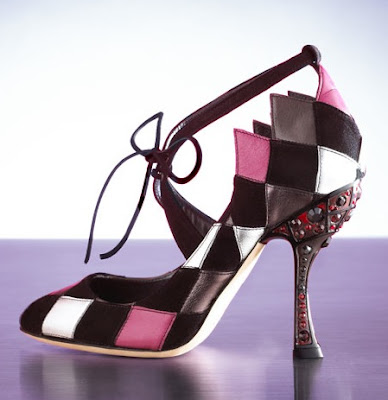 I bought some new shoes the other day. A pair of lizard skin Calvin Kleins, as it happens - a rare extravagance. Throwing them at someone, thus being unlikely to get them back, would not have crossed my mind. Throwing a shoe at a person's head isn't considered insulting in only the Islamic world, though it does carry a particularly degrading symbolism (showing the sole of your shoes is considered deeply offensive). The sensitivity is related to the fact shoes are considered ritually unclean in Islam. In addition to ritual ablutions before prayer, Muslims must take off their shoes to pray, and wearing shoes inside a mosque is forbidden. Shoes should either be left at the door of the mosque, or carried (preferably in the left hand with the soles pressed together). When the statue of Saddam Hussein was toppled in Baghdad in 2003, Iraqis beat it with their shoes.
Which led me to a few more choice international insults. The response of the English archers after Agincourt to their French adversaries of two upraised fingers, a testament to the fact that they still had them - the enemy disabled captured archers by hacking off their two pulling fingers - is well known - even Churchill got them the wrong way round sometimes.
I had not realised that the 'thumbs-up' sign, beloved of everyone from Bean to Rolling Stone was also gravely insulting to some, particularly in Turkey and the Middle East. "Sit on it and spin" seems to be the message.
Bush commented that the shoes were a 'size 10' - the same size as mine, coincidentally. Perhaps I should offer to donate my new CK's to the man who is now in need of a new pair. After all, it was a remarkably good shot.
The image is of a Calvin Klein Harlequin Bootie (sic) retailing at almost $900. Mine cost rather less and have lower heels. A friend of mine knows a lot more than me about shoes. But she's a woman, so it helps. 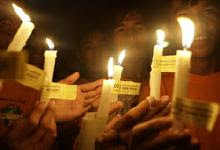 Apart from Eleanor Roosevelt's dreadful hairstyle, the sight of her reading the Declaration of Human Rights sixty years ago today, on Human Rights Day was inspiring. I found myself thinking how far we really do have to go as a species which seems incapable of rising above barbarism, when the spirit might be willing but the flesh is undoubtedly either recalcitrant or simply weak. Pope John Paul II was right when he called the Universal Declaration of Human Rights “one of the highest expressions of the human conscience of our time,” but conscience alone is no restrainer of terror.
Setting aside the manipulative politics of the hapless residents of Gaza for a moment - God knows, enough has been written about Israeli 'apartheid', walls and sanctions, I wonder how the cause of human rights is furthered by an Anglican church in Piccadilly allowing offensive, anti-Semitic parodies of Nine Lessons and Carols, endorsed and encouraged by Bruce Kent and Pax Christi, inter alia? Perhaps a more suitable venue next time might be Sderot, within range of Katyushka rockets where, as Ban Ki Moon has suggested, the most vulnerable continue to be on the frontline of hardship and abuse.
The image is of a 60th anniversary commemoration ceremony in Manila. One of the declaration's 30 articles is the 'right to freedom of thought, conscience and religion'. Right.
Left here by Unknown on Wednesday, December 10, 2008 No comments:

Screaming of the Lambs 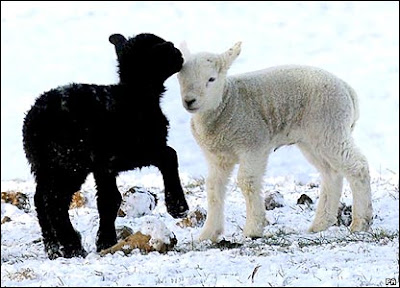 I'm reminded today of being awoken early some years ago in a pleasant suburb of Karachi by the sound of pain. Screaming, as if by tortured children, penetrated my consciousness. Looking out of my window into neighbouring courtyards, lambs were suspended, heads down and bleating pitifully, awaiting the merciful flash of the knife, honed according to the Prophet's instructions and concealed from the victim before the single strike. No such awakenings this morning - here the business is transacted in the privacy of the slaughterhouse.

At the risk of doing irremediable violence to the greatest of all modern Arab poets, I came across this today, the first day of Eid ul Adha, or Greater Eid, the Festival of Sacrifice.

After they nailed me and I cast my eyes towards the city
I hardly recognised the plain, the wall, the cemetery;
As far as the eye could see, it was something
Like a forest in bloom. Wherever the vision could reach,
there was a cross, a grieving mother
The Lord be sanctified! This is the city about to give birth.

Badr Shakir al-Sayyab of Iraq, Christ after the Crucifixion
One-third of the sacrificial food today is given to the poor. Outside the mosques, the poor are fed, in accordance with the law. By contrast, the traditional nativity play was cancelled at a primary school in Nottingham and rescheduled for the New Year after parents were told it would interfere with the Eid festival, when it seemed many of the participants would be unavailable for rehearsals.
Left here by Unknown on Monday, December 08, 2008 No comments: