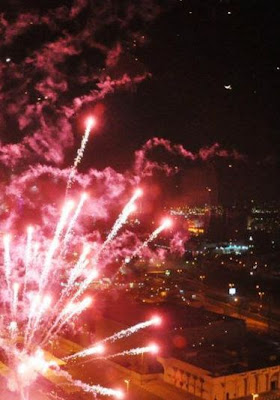 There are times when the delights of my second home have to be forsworn. National and Liberation Days are one such occasion. The entire country goes into shrieking hyperactivity; a trip normally taking a half hour takes ten times as long and one is fortunate to arrive at one's destination in a balanced frame of mind. If, indeed, one arrives at all. Small people arrange impromptu firework displays - picture kindly supplied by a friend from the safety of the fifteenth floor of his apartment  - this one was in a public location under the indulgent eyes of Kuwait's Finest, it would seem, and was allowed to proceed without interruption, endangering life and property. Ah, well, kids are kids after all, and a few less cars or indeed pedestrians on the road can only be a good thing.. The old maxim is true - it's better to give than receive. Terror and mayhem, that is...

I madesomething of an inner vow - always dangerous - after having been trapped endlessly circling amidst the festivities in Ahmadi for four hours last time -that next year something, in true Micawber fashion, would jolly well have to turn up. Since I wanted to see at least one of the Six Nations games, the Red Lion in the Metropolitan in Dubai seemed a tempting alternative. 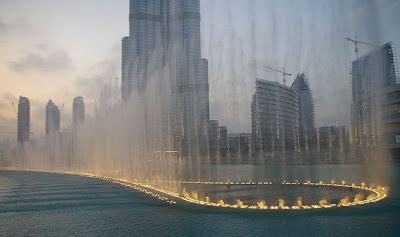 So, a little trip to the tallest building on the planet, surrounded by the most expensive pieces of retail real estate in the world in its shadow did have a certain hedonistic appeal. The Khalifa Tower is really quite impressive. Onehundred and twenty four floors in a whisker under forty-five seconds is quick. The book value of 64km/h is true. Really. Especially as there's at least three hundred and eighty metres more to the top where cloud cover blankets the summit. The structure is supposed to have thirty thousand residential plots. Atclose to forty thousand dollars a square metre, I can't see myself taking up residence any time in the near future, but the crash of 2008 slashed 60% off property prices, which means I could afford a toilet there. Whatever. It's incredibly beautiful - the three-lobed footprint being inspired by the hymenocallis flower.We saw the fountains pirouetting like ballerinas from the top. If stratospherically expensive can be classified as beautiful, then, yes, it was.
Returning to terra firma, I am now officially overweight. By at least four kilograms. This is a disaster and one which must be remedied. Not possessing a pair of bathroom scales, I relied upon the ones - assuredly most reliable - in the Mall of the Emirates' ski slope to dolefully inform me that I was no longer teetering over the edge of the normalcy of avoirdupois for my height - I am surely shrinking as spinal jointing becomes less flexible -  in other words, sans mincing - I have become officially, ashamedly, weepingly, truthfully FAT.

This did not, however, spoil my enjoyment of the ski slope. A Frenchman with some attitude seemed determined to race, so it was fun to chase him down from time to time. I had a brand-new pair of Rossignol boots which were kind to my feet and I persuaded the authorities to part with a new pair of Atomics which glided effortlessly with minimal pressure on the knees. Two hours flew, I have to say, but the additional poundage gave me pause beforesigning up for two more. In addition, I was having to compete with a small person who hounded me, insisting on practising his rather rudimentary Englishon me while sharing the chairlift. Perfect conditions and no wind, but somehow a little like juice from concentrate...not the real thing. I think I'd've preferred to have tested my skills on a mountain rather than inside a corrugated aluminium tube. 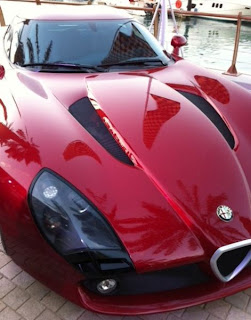 Kathy Lette's tasteless but really very funny penis and religion joke has been endlessly reposted elsewhere, but I was reminded of it when paying a second brief twilight visit to the Concours d'Elegance at the Marina this evening. The fact that I felt the need to go twice has no significance whatsoever. The testosterone dripped as wanabee machos, chocolate gangsters to a boy, mingled saliva and possibly semen on to their overtightened trousers.  The hordes having largely left to do more shopping, I almost had the exhibition to myself - from the Cord to the Veyron. Bentleys, Aston Martins, Rolls Royces - a multitude of expensive antique and modern machinery was on display, louring stormclouds notwithstanding. It was difficult not to reflect on the conjugation (sorry, ladies) between long, oversized, horsepower-rich vehicles and sexual congress. Anyone I know who races cars online might like to take notes.
Having now turned sixty, such amusements are less frequent than formerly, but one's long-term memory improves with age. Or so I am told.
Kathy Lette is now fifty. In case any lady readers haven't come across her, get your own back and look here.
Left here by Unknown on Saturday, February 18, 2012 No comments:

I have been hideously and irremediably idle in recent times. Seduced by twitterings and sound bite Facebook posts, I have found my thoughts leaping like a frog on a random succession of lily pads from one vapid thought to another. Nothing new there, then. The short sharp interjection is beguilingly direct but one is in default mode most of the time hence any logical train of connected thought becomes difficult. How smug we all feel when tweeting a crackling one-liner worthy of a Presidential candidate. Apologies in advance then for the random unconnectedness of what follows in the form of a few small passing clouds which have stayed together long enough to engage my attention.
Neglecting for a moment trivia like the European Debt Crisis, today, I read an article – surprising how hard it becomes to read when surrounded by pictures – which explored the principle of proximity in the context of loving my neighbour. How far, morally as well as geographically, does my neighbourhood extend and what exactly are my responsibilities towards it? To those with whom I have meaningful interaction on a regular basis?  Mitt Romney? My Facebook friends and are they really my friends at all? The pizza delivery boy?  Those suffering from disease, famine and disaster in Somalia? Or, the people who don’t like me very much. This list is the longest and most extensive.
On a different note. For impenetrable reasons, my TV is not giving me what I want. I quite like the action channel – sex and mindless violence being vastly entertaining usually, but these days a fat man in a dishdasha who commentates jovially on local football matches, folding his arms at regular intervals is almost more than flesh and blood can stand. It’s a toss-up really whether this or the WWF gets turned over first. The Turkish channel has the advantage in that it shows images of large breasted women, usually suffering some form of domestic violence in Istanbul, but the highlight of the week was finding the 'local' equivalent of the God Channel where jolly people big it up with specially hip bearded guests discussing the relative merits of tattoos and piercings. 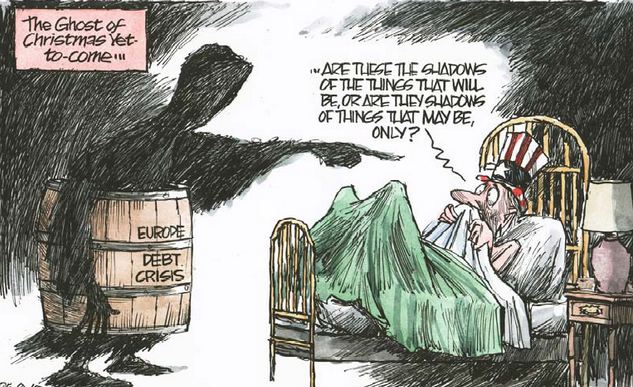 In truth, I have had little time to channel hop, since, with fatuous shortsightedness and in a moment of weakness I agreed to ‘read a few lines of Dickens’ for a celebration of his 200th birthday this month. Expecting to be given the odd line or two of Pickwick or Nickleby, which I could intone from some kind of lectern like Simon Callow, the whole monstrous hydra has burgeoned and grown like a smallpox rash, and has now metamorphosed into a rather jolly song and dance routine, fully scripted and choreographed. My bleats of protest were steamrollered, a script was thrust into my hand by a remarkably persuasive director and there were actual lines to learn and stage directions to follow. The principle is clear. That which begins simply, when placed into enthusiastic hands, takes on a life of its own and participants, willing or not,  are helplessly carried like rafts on the rapids in ever increasing circles. It remains to be seen whether we survive the jeering and catcalling as we all slowly hang ourselves on Friday night. I hope there’s a vomitorium.

Left here by Unknown on Thursday, February 09, 2012 No comments: